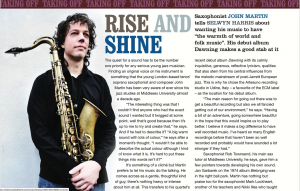 Saxophonist JOHN MARTIN tells SELWYN HARRIS about wanting his music to have “the warmth of world and folk music”. His debut album Dawning makes a good stab at it

The quest for a sound has to be the number one priority for any serious young jazz musician. Finding an original voice on his instrument is something that the young London-based tenor/soprano saxophonist and composer John Martin has been very aware of ever since his jazz studies at Middlesex University almost a decade ago. 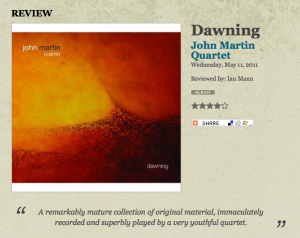 “Dawning” is a remarkably mature and assured statement from such a young musician. His writing is consistently interesting and already he seems to be showing signs of transcending his influences. The playing from all concerned is excellent and the quality of the recording a huge plus. The album is a worthy addition to the illustrious F-ire catalogue and represents a major statement from Martin. If he can maintain these standards he is surely destined to become a major figure on the UK jazz scene. 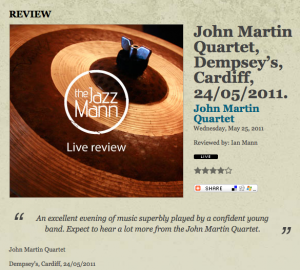 For me, “Dawning”, the début album by this fine young quartet led by the saxophonist and composer John Martin has been one of 2011’s most pleasing new discoveries. Released on the F-ire Presents imprint the album is reviewed elsewhere on this site. It’s a remarkably mature first album featuring a collection of first rate tunes, all written by Martin, plus top quality musicianship and superior production values.

At the time of writing the quartet is just coming to the end of a successful Jazz Services supported UK tour to promote the new record. Martin told me that the tour has gone as well as he could have wished with Birmingham and London particular highlights. The Rush Hour Blues show in Birmingham drew a large and appreciative crowd with the quartet enjoying a record amount of CD sales. Martin felt that the London show, at POSK, represented a creative peak in terms of the band’s playing of the album material. 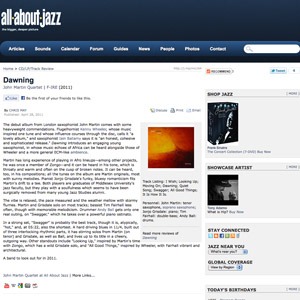 The debut album from London saxophonist John Martin comes with some heavyweight commendations. Flugelhornist Kenny Wheeler, whose music inspired one tune and whose influence courses through the disc, calls it "a lovely album," and saxophonist Iain Ballamy says it is "an honest, cohesive and sophisticated release." Dawning introduces an engaging young saxophonist, in whose music echoes of Africa can be heard alongside those of Wheeler... Read More 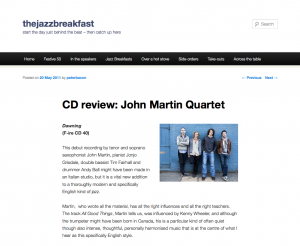 This debut recording by tenor and soprano saxophonist John Martin, pianist Jonjo Grisdale, double bassist Tim Fairhall and drummer Andy Ball might have been made in an Italian studio, but it is a vital new addition to a thoroughly modern and specifically English kind of jazz. 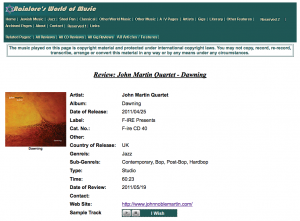 The John Martin Quartet should go far and is definitely one to look out for. Martin and Grisdale in particular are players of enormous promise that should see them right at the top of the British scene in no time. You need to hear this music for yourself! Dawning is one of the most fascinating and beautiful releases of the year so far, and it's a quite stunning debut effort for such a young group of musicians. The F-ire collective have done themselves proud again!

Indeed, I have no hesitation in saying that the John Martin Quartet's Dawning should be considered an essential addition to any good contemporary jazz collection. I certainly wouldn't be without my copy anymore, it's a firm favourite here already. 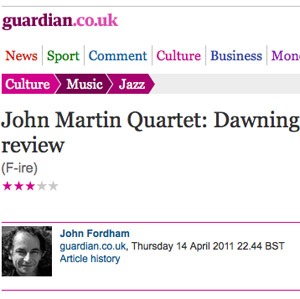 Saxophonist John Martin and pianist Jonjo Grisdale are recent graduates of the same Middlesex University jazz education that produced Led Bib, though this is much closer to orthodox jazz than Led Bib's rock and electronics-infused work. At times the session betrays the tentativeness of a debut, but Martin and Grisdale are players of real promise. Martin has played in salsa and Afro bands, and for Guillemots, but the lyrical sway ofAndy Sheppard, the atmospherics of Jan Garbarek, the pensiveness of Kenny Wheeler... Read More 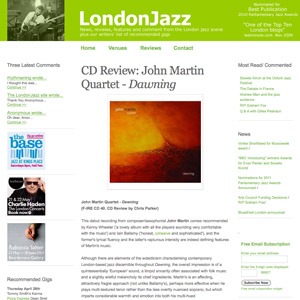 This debut recording from composer/saxophonist John Martin comes recommended by Kenny Wheeler ('a lovely album with all the players sounding very comfortable with the music') and Iain Ballamy ('honest, cohesive and sophisticated'), and the former's lyrical fluency and the latter's rapturous intensity are indeed defining features of Martin's music.

Although there are elements of the eclecticism characterising contemporary London-based jazz discernible throughout Dawning, the overall impression is of a quintessentially 'European' sound, a limpid sincerity often associated with folk music and a slightly wistful melancholy its chief ingredients. Martin's is an affecting...Read More

This is an accomplished debut that places the emphasis firmly on the melodic side of jazz playing and as such it is one of the most enjoyable listens of the year thus far.  Tim Stenhouse 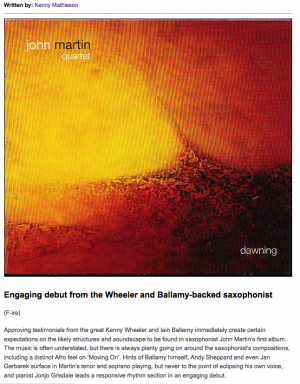 Approving testimonials from the great Kenny Wheeler and Iain Ballamy immediately create certain expectations on the likely structures and soundscape to be found in saxophonist John Martin’s first album. The music is often understated, but there is always plenty going on around the saxophonist’s compositions, including a distinct Afro feel on ‘Moving On’. Hints of Ballamy himself, Andy Sheppard and even Jan Garbarek surface in Martin’s tenor and soprano playing, but never to the point of eclipsing his own voice, and pianist Jonjo Grisdale leads a responsive rhythm section in an engaging debut. 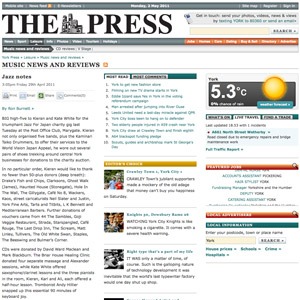 Jazz depends on instant improvisation on a given theme, so why should we need recordings to repeat the experience? One answer is that exhilarating though the live experience may be, so many densely packed ideas come out they need many listens to savour.

At a time when internet downloads appear to be the death knell of CDs in the shops, we are thankful for the energies of the musicians who continue to make them. On Wednesday, Scarborough Jazz will present the John Martin Quartet, playing music from their new CD. Dawning (F-IRE Records) is the debut album from the quartet, eight original and rewarding compositions by Martin. With sounds akin to the ECM record label, it is not surprising since the album was made at the Artesuono studio in Italy, an ECM favourite...Read more 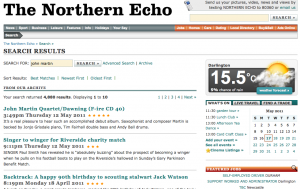 All are new names to me but they combine well together on a sensibly varied and attractive programme which is well worth hearing. f-ire.com.

Carew Reynell reviews this new CD for us:

Dawning is the first disc from the north London based John Martin Quartet, and comes with recommendations from British jazz luminaries such as Kenny Wheeler and Iain Bellamy. The album was recorded in the Artesuono studio in Italy (albeit in mid-winter), and the sound is rich and expansive.

All eight tracks are composed by John Martin, who plays tenor and soprano sax, and they make up a very amiable and intelligent collection. While using a range of (sometimes tricky) meters and drawing on many influences, Martin is also refreshingly unafraid to keep it simple when that serves the music. He allows plenty of space for the rest of the band (Jonjo Grisdale on piano, Tim Fairhall on double bass, and Andy Ball on drums), and is well supported. I particularly enjoyed the warm, rounded bass.

Jazz UK Three For The Road 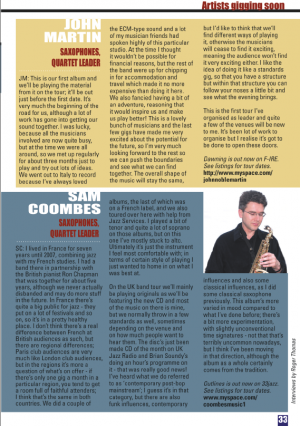