The Hidden Notes - Spirit of Adventure

The Hidden Notes offers a window into a unique sound world. It is a celebration of the saxophone and all the beautiful colours that are hidden just beneath the surface.

When a musician plays a note of a certain pitch, the musical instrument vibrates or resonates, producing a complex pattern of sound waves made up of many different frequencies. The most noticeable sound wave is called the fundamental, but there are other waves with higher frequencies, called harmonics. These are the hidden notes.

John Martin has spent the last 4 years coaxing these rather shy and often badly behaved notes out from their hiding places. Through the use of special fingerings and blowing techniques it is possible to produce several notes simultaneously, extending the sound world of the saxophone from a monophonic to a polyphonic instrument. Martin's focus is on incorporating these polyphonic sounds into tonal music. Circular breathing then allows for the development of continuous rhythmic patterns, opening up many new exciting rhythmic and textural possibilities.

"John Martin has thought (and realised) the unthinkable; harnessing all the multiphonic sounds that a saxophone can make, he has crafted them within the finest compositions. No small feat. These resources are hard to control, and it is a patient labour of some love for the instrument that he has succeeded where others have not dared tread... not just the gimmick of one squawky tune, but a controlled double album of surprises and varied emotion... A milestone for both himself and the saxophone world" Barak Schmool – Lecturer at The Royal Academy Of Music

The record has been mastered by the grammy award winning mastering engineer Mandy Parnell and is available as a double CD digipack and digital download from my website and all good record stores.

“Instead of the noisy squawks and atonal meditations of free jazz, Martin’s interest in the horn’s extended techniques lies in a more quietly lyrical and painterly expression of his themes...a charmingly expressive alternative to some of the more in-yer-face enterprises in current UK jazz.” ★★★★ Selwyn Harris – Jazzwise, August 2016

"A fine body of work... Martin has indeed staked out some new territory and made it his own" ★★★★ Budd Kopman - allaboutjazz

“Highly distinctive... Martin is one of the first saxophonists to make such wide ranging use of multiphonics and overtones in the context of through composed tonal music... a very well balanced and well integrated group...that gives full reign to Martin’s innovative saxophone techniques” ★★★★ Ian Mann – Thejazzmann

"thoughtful and technically adventurous music…Martin builds improvisations with a fine concern for tonal subtleties, shrewdly making use of multiphonic sounds and advanced fingerings… a distinctive voice and an explorer of restless promise" ★★★ John Fordham - The Guardian

"The sounds that Martin finds and works with have an elegance to them that is markedly different from the sort of jarring, squawking that one might associate with overtones and multiphonics and that way in which Martin and his band build these into the pieces is stunning” Chris Baber – Jazzviews

“You could be forgiven for thinking on occasions while listening to this band of vibraphone (Ralph Wyld), guitar (Rob Updegraff), double bass (Tim Fairhall) and drums (Tim Giles) that it was fronted by multiple saxophones. That is because John Martin, who plays tenor throughout, is a master of multiphonics” Peter Bacon – Jazz Breakfast 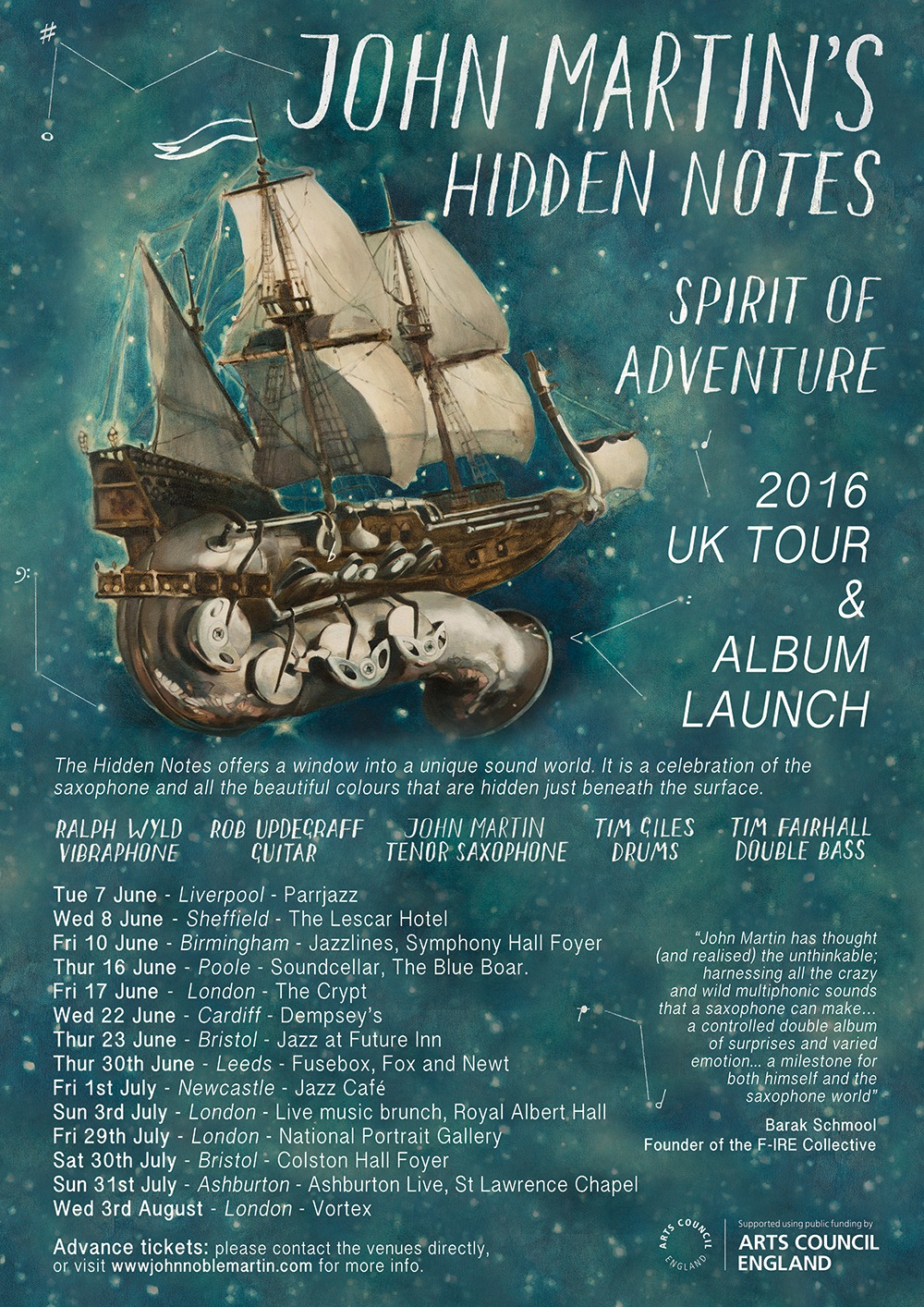 The Hidden Notes gratefully acknowledges support from the Arts Council of England.

John has preformed and guested with: Gareth Lockrane, Roberto Pla, Dele Sosimi, the legendry ska band The Beat and the award-winning singer Liane Carroll. He is a member of the critically acclaimed contemporary jazz folk septet Metamorphic and the Dr Das Dubnoiz Coalition, the side project of Dr Das, the bass player and founding member of the Asian Dub Foundation. His début album “Dawning” was reviewed as ‘one of the most fascinating and beautiful releases' of 2011, receiving positive testimonials from both Kenny Wheeler and Iain Ballamy. John has been a guest on both BBC radio 3’s jazz line up and jazz Fm’s Sunday jam and has been featured in jazz wises taking off.

Ralph Wyld studied at the Royal Academy of music and has just won the very prestigious 2015 Kenny Wheeler prize as well as the 2015 Dankworth Prize for Jazz Composition. A former principal percussionist of the National Youth Orchestra of Great Britain, Ralph has toured Europe, Brazil and China, and featured in performances broadcast on BBC television and radio. He is set to release his debut album in 2016, on leading European Jazz label Edition Records.

Rob studied Jazz/Classical guitar and composition at Guildhall School of Music and Drama. He is currently hugely in demand both as a performer and session musician. Recent highlights include performing and recording with Sony artist Alani featuring an appearance on Later with Jools Holland and TV and radio performances in France and England and live European dates. He played on Jamie Cullum’s latest album alongside Gregory Porter and Laura Mvula. In the last few years’ performances have ranged from Ronnie Scott’s Jazz Club to a Tour of Japan, with European festival appearances including performances with American blues singer Earl Thomas and The Meters legendary funk drummer Zigaboo Modeliste.

Tim is an award-winning performer and composer who is one of the most respected jazz drummers on the UK scene today. After several years of successful freelancing, playing with the likes of Stan Sulzmann, Kenny Wheeler and Julian Arguelles Tim moved to London to study at the Royal Academy of Music. It was here that he met James Allsopp, co forming the award-winning band Fraud. Their eponymous debut album was nominated numerous awards including, BBC Best Album 2007, Ronnie Scott’s Best New Act 2007 and In July 2008, Fraud also won the BBC Jazz Award for Innovation.

Has performed on many of the most significant stages in Britain and internationally, including the Barbican, the Royal Festival Hall, the Royal Albert Hall, Glasgow Royal Concert Hall, Cologne Philharmonic, Gulbenkian Grande Auditorium Lisbon, and many others. In 2008 he graduated with distinction from the M(Mus) in Jazz Performance at the Guildhall School of Music and Drama, and since then has played widely on the London jazz scene and around the world, including extensive touring with world music superstar Yasmin Levy.

“A great night with John Martin and his quartet at Loddon Mill Arts last night. Truly exceptional musicians who entertained a full house until we could applaud no more! Please do come back...a very memorable evening of music making at the very highest level!” Loddon mill Arts