“John Martin has thought (and realised) the unthinkable; harnessing all the crazy and wild multiphonic sounds that a saxophone can make, he has crafted them within the finest compositions. No small feat. These resources are hard to control, and it is a patient labour of some love for the instrument that he has succeeded where others have not dared tread… not just the gimmick of one squawky tune, but a controlled double album of surprises and varied emotion… A milestone for both himself and the saxophone world”

How it all began.

At first I did this through trial and error, and then later studied the main publications on saxophone multiphonics. I soon realised that I would need to create my own system, if I wanted to incorporate these sounds into tonal music. Current publications generally present all the weird and wonderful multiphonics the author could find, but do not attempt to order or refine the tuning of these note combinations for use in a tonal context.

I have spent the last four years developing and refining a tonal approach to the polyphonic soundworld of the saxophone. Through the process I have discovered many beautiful and affecting sounds, which I have used as a starting point for the series of compositions that you can hear on my forth-coming double album.

I will be embark on a UK tour with my quintet in June 2016. This will coincide with the launch of my new album “The Hidden Notes, Spirit Of Adventure” which will be released on the F-ire label. More info here. https://johnnoblemartin.com/the-hidden-notes/

CD’s are currently being manufactured; I’ve had a beautiful painting of a saxophone ship commissioned to represent the journey of this project, which will be available as prints in the near future.

There will also be a short film about The Hidden Notes by Kevin Brown from Motherbrownfilms and a new Facebook page here: https://www.facebook.com/thehiddennotes/ Please show your support by liking the page.

Hope to see you at one of our upcoming gigs!

The Hidden Notes gratefully acknowledges the support of the Arts Council of England. 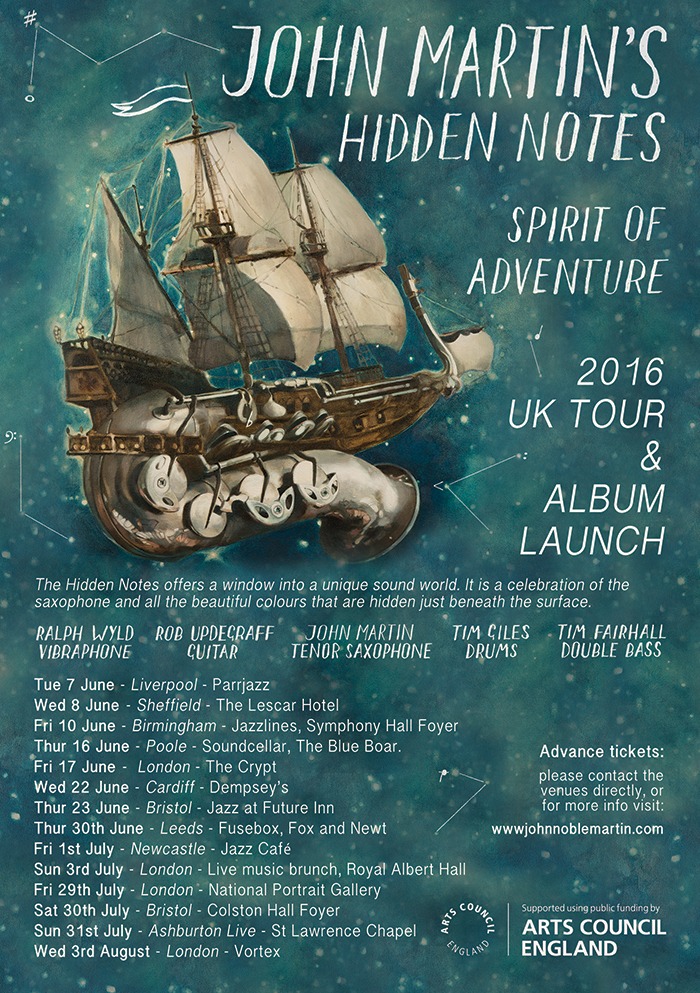