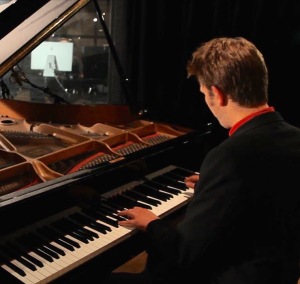 Since graduating from the Birmingham Conservatoire in 2002, Hamish has played with many artists and in many projects in London and abroad. Having led his own trio on Cruise ships, he built up a vast repertoire of standards and was lucky enough to play in the house band backing artists such as The Shirelles, The Osmonds, and Trace Adkins among others.

Having relocated to London in 2007 he has played with many bands, performing at venues such as 606, Jazz cafe, Queen Elizabeth Hall and Royal Albert Hall. Some of the artists he has played with and recorded for include Incognito, Grace Jones, Odyssey, faze Action and live electronic project Bassically, which is receiving a lot of attention in the Dance music world including releases on Black Butter and Defected records.

He has also been busy working on his own music ranging from Jazz to Electronic music which has taken him on various tours around the UK and Europe. Currently he is busy writing an album of original jazz songs and in between gigs is recording and writing for various producers, including the ISM label and more recently has signed to Wagon Wheel records