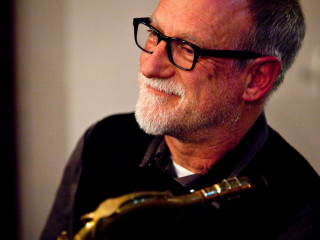 You could be forgiven for thinking on occasions while listening to this band of vibraphone (Ralph Wyld), guitar (Rob Updegraff), double bass (Tim Fairhall) and drums (Tim Giles) that it was fronted by multiple saxophones. That is because John Martin, who plays tenor throughout, is a master of multiphonics. As a cover note to this double CD explains: “It is a celebration of the saxophone and all the beautiful colours that are hidden just beneath the surface. When a musician plays a note of a certain pitch the instrument resonates, producing a complex pattern of sound waves. The most noticeable soundwave is called the fundamental, but there are other waves with higher frequencies called harmonics. These are the hidden notes.”It’s an often quite spooky sound, the ear leaning towards a high neurontin singing harmonic while a low fundamental grumbles beneath. And not always absolutely comfortable in the ear; I can imagine an uninitiated listener thinking: can this guy play properly? But hey, that’s what is so great about jazz – it upsets the preconceptions. And Martin doesn’t do the multiphonic thing all the time. When he is concentrating on producing one main note rather than three he has a muscular tone and a melodic bent when improvising. The opener on CD2 is a fine place to leap in – it’s attractively titled The Optimistic Pessimist.The sometimes less clear focus of the saxophone timbre is also nicely contrasted against the clear-as-a-bell vibraphone and clean electric guitar sound, the whole band working assuredly on these rounded compositions.